Today is World Alzheimer's Day. Most all of us either know someone who has experienced this terrible disease or has been touched by it, may it be family or friends. My paternal grandmother passed away in the 70s and I was pretty young then, but I do remember that she was a little forgetful towards the end of her life. In fact, I recall one time in particular when I was at her house and she didn't seem to know who I was or what I was doing at her house. I don't recall her being diagnosed with Alzheimer's (or maybe she was and I just didn't remember it at the time), but I believe she was probably affected by it. It saddened me then to think that she didn't know her own granddaughter, but as an adult, I now understand that she wasn't herself. Still, it is an interaction that I will most likely never forget.

Carolyn King has been affected by Alzheimer's, recently losing her grandmother to it. Cammie (as she is known in the stamping world) recently designed a stamp set (you can purchase it here) and is donating all of her proceeds from sales of this set to the Alzheimer's Association in honor of her grandmother. In celebration of World Alzheimer's Day, she has asked people to make a card for a caretaker of a person affected with Alzheimer’s. In addition, Cammie has contacted some amazing companies and individuals in the stamping world and they have generously donated many items which she is giving away as blog candy. While it would be a thrill to win such a prize, I have decided to participate by making a card for her cause. I will be sending it to the home where her grandmother last lived.

Here is my card: 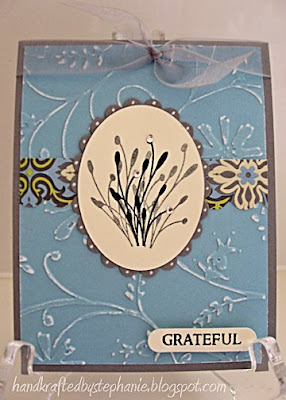