Welcome to the second day of sneak peeks of the September Sparkle Creations Rubber Stamps release! Sparkle is releasing 6 new images at midnight EST this Saturday, October 9.. Today Lisa, Piali and I are previewing Elf Oliver! 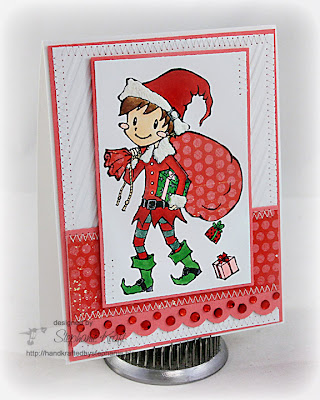 Poor Oliver is going to get a complex.. for one thing, I keep referring to him as Ian.. I'm not sure why, but I do. Now I've surrounded him with pink and bling.. : ) I colored him with Copic markers and pieced his toy bag from paper from Echo Park Everybody Loves Christmas. I added some Liquid Applique to the edges of his hat and elf suit. I punched the border with my Martha Stewart Scallop Dot border punch and added 2 sizes of red rhinestones to the holes.

Tomorrow I will be back with the entire SCRS team to preview the final image... and it's also RELEASE DAY!

Thanks SO much for stopping by!